That’s mayor Carmen Yulín Cruz pictured above, who on Wednesday was wading chest-high through flooded sections of San Juan carrying a bullhorn while looking for victims. The optics of the picture are remarkable picture because it was taken almost a week after Hurricane Maria devastated much of Puerto Rico. It also demonstrates what a tough and left San Juan in ruin, but it’s also a magnificent testimony to what leadership is supposed to look like.

You’re not seeing much leadership in Washington. The response by the Administration and FEMA (Federal Emergency Management Administration) to the dire situation has been tepid at best, and outright indifferent at worst. While the island isn’t as easily accessible as say, Florida or Texas, the United States still stands as the most powerful country to have existed, so surely to goodness if you’ve landed astronauts on a giant rock 300,000 miles away, you can also muster up the resources to send in some ships to an island off your right coast.

Cruz took to the airways Friday night on CNN, where she begged for help. “I will do what I never thought I was going to do. I am begging, begging anyone who can hear us to save us from dying,” said Cruz.

Then Cruz started taking her digs at the Trump Administration. “If anybody out there is listening to us, we are dying, and you are killing us with the inefficiency.”

Well guess who was Tweeting this morning? Yup: 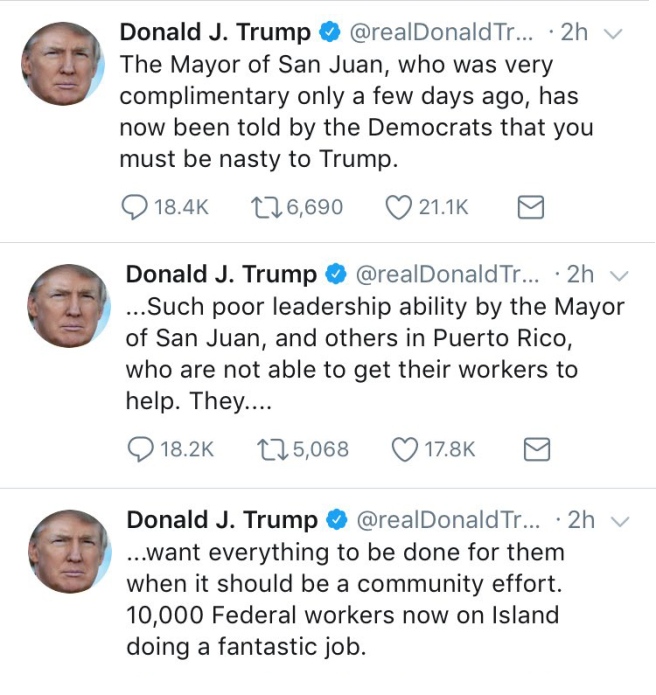 There’s no way of spinning it. Trump’s tweet was dripping with rage towards a (very popular) female politician, who just so happens to be a Democrat, and perhaps worst of all, an hispanic.

So the President “goes there” yet again. Hillary Clinton, another accomplished poli, is a “nasty woman.” An African American football player protesting police brutality? You’re a “son of a bitch.” And who can mistake the obvious tinge of racism, accusing residents of “wanting everything to be done for them.”

It’s classic Trump-ism. Criticized by someone directly, heaven forbid this time a woman from a racial minority, he reaches for his phone and rages to the base. It’s a much a release for him as it is consumption for the folks who worship him.

But hey, maybe everything is going just great like Trump says? Oh yeah, about that possible Cholera outbreak …