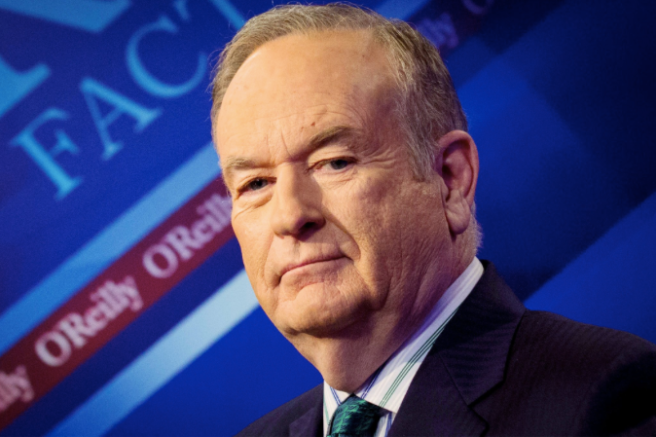 Bill-o. You remember him, no? Many people are still struggling to forget his slimy presence on this planet, in particular the women he sexually harassed – god knows who for god knows how many years.

Since getting canned in disgrace from Fox News, which was (and for all we know still is) a seething pit of predatory sexual misconduct against women, news came out over the weekend in a significant NY Times story that O’Reilly made a sexual harassment settlement in January of 2017 to the mind-boggling tune of $33 million. The person who O’Reilly settled with was former Fox News (of course) personality Lis Wiehl, who while acting as a supporting mouthpiece on one of O’Reilly’s cheesy segments, also provided Bill-o with legal advice.

Let the record also show that as far as we know, Wiehl is the sixth woman that’s received a payout from O’Reilly to settle an harassment claim.

That Wiehl settlement is estimated to be nearly one-half of O’Reilly’s entire net worth, which begs the question, what the heck did he do to this woman? (as of this writing, all we know is that he sent her unsolicited pornography which is pretty bad, but there’s gotta be a whole lot more to what was going on. Also, it’s come to light that Fox News, just a month after the Wiehl settlement, signed O’Reilly to a 4 year, $100 million contract extension because, well, Fox News I guess).

In the time since the Times story, O’Reilly has been, as you’d expect, very contrite. Oh, who am I kidding?  He went on the attack by having his “new” legal council, Mark Fabiani send out this drivel:

Once again, The New York Times has maliciously smeared Bill O’Reilly, this time even failing to print a sworn affidavit from his former lawyer, Lis Wiehl, repudiating all allegations against Bill O’Reilly. The Times ignored that evidence, sworn under oath, and chose to rely on unsubstantiated allegations, anonymous sources and incomplete leaked or stolen documents.

In its latest diatribe against Bill O’Reilly, the Times printed leaked information provided by anonymous sources that is out of context, false, defamatory, and obviously designed to embarrass Bill O’Reilly and to keep him from competing in the marketplace.

Nothing to see here, folks. Bill, you see, is a very misunderstood man, no thanks to that mean old New York Times which had the audacity of reporting on actual court affidavits. Just to be extra sure that the people be reassured that it’s all be no big deal, O’Reilly went on the TV Monday morning, and managed to pick himself a fight:

Watch Bill O'Reilly's reaction when I asked him about sexual harassment. Part of the full exchange @megynkelly aired this AM @CBSThisMorning pic.twitter.com/xivQOvjs38

Sure you wanna do that, Bill? Ms. Kelly, who currently has a morning talk-show gig that’s been more or less a rating’s disaster, is nonetheless, definitely not a woman to ratf*ck with:

“O’Reilly’s suggestion that no one ever complained about his behavior is false. I know because I complained.” @megynkelly on Bill O’Reilly pic.twitter.com/BO8ifQcJbu

But oh well, it doesn’t matter. Bill has already moved on with bigger fish to fry:

Probably a wise choice, Bill. Unlike Kelly, up against God you might still have a fighting chance.

View all posts by ajbassett