Why in heaven’s sake is this man defending the indefensible?

Oh, please. It’s been well known that the Representative Frederica Wilson has held a long-term personal relationship with the Johnson family, and was there with Myeshia Johnson, widow of fallen Sgt. La David Johnson who died in an ambush in Niger earlier this month, took that phone call from Donald Trump, from which he reputedly said “he knew what he signed up for, but I guess it still hurt.”

If anyone should be able to lend an empathetic ear, it ought be General John Kelly, who lost his son Robert, to a roadside bomb in Afghanistan in 2010. Instead, he’s decided to do his boss’s heavy lifting by attacking those who had the audacity of speaking up over Trump’s utterly reprehensible behavior towards the widow of a fallen serviceman.

So cry me a river the next time anyone bemoans how difficult a job Kelly has controlling his boss. He signed up for it, and it now appears, he’s more than willing to wade into the political muck.

Hoo boy, hold onto something sturdy. This one is a doozy.

President Donald Trump told U.S. Army Sgt. La David Johnson‘s widow Tuesday that “he knew what he signed up for … but when it happens, it hurts anyway,” when he died serving in northwestern Africa, according to Rep. Frederica Wilson, D-Miami Gardens.

The president called about 4:45 p.m. and spoke to Johnson’s pregnant widow, Myeshia Johnson, for about five minutes. She is a mother to Johnson’s surviving 2-year-old son and 6-year-old daughter. The conversation happened before Johnson’s remains arrived at Miami International Airport on a commercial Delta Airlines flight.

Wilson watched as the widow, who is expecting their third baby in January, leaned over the U.S. flag that was draping Johnson’s casket. Her pregnant belly was shaking against the casket as she sobbed uncontrollably. Their daughter stood next to her stoically. Their toddler waited in the arms of a relative.

I mean, where do you even start over something like this? The President of the United States tells the grieving woman carrying child, with her two other born children by her side to paraphrase, “tough shit lady, but your husband was asking for it.”

The problem, as there always seems to be one when it comes to having something, anything sticking to this wretched man who oozes from his mouth on a daily basis a slime of contempt towards the most vulnerable. Once again we’re faced with plausible deniability. While Johnson’s call was witnessed, it was by one of those dastardly Demo-crats. You can just see the vapid wheels already churning amongst The Donald diehard rushing to the President’s defence of this ceaseless sideshow of the grotesque.

God, I wish there was a tape of that conversation, not that it, I suppose, would make much of a goddamn difference.

UPDATE: There are now at least two witnesses to this event. From the Washington Post: 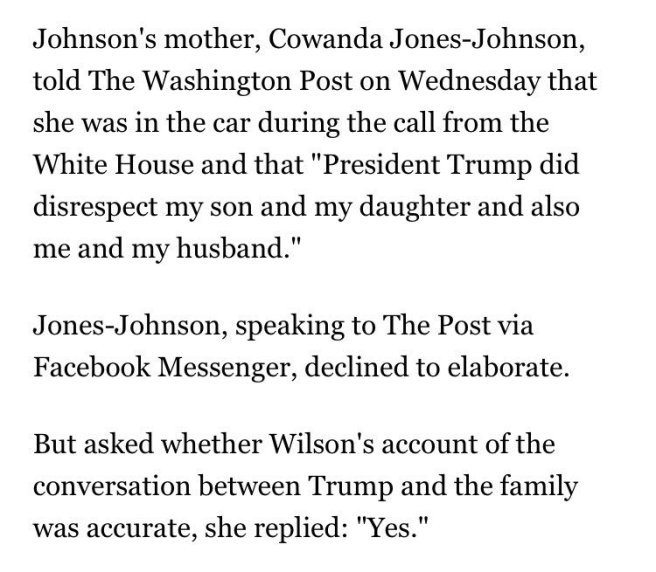 Also a tell, the White House’s reaction to what is reported to have happened hasn’t been to deny the event, but that the conversation between Trump and the grieving widow should be kept confidential:

On Tuesday night, an administration official, speaking on background, told CNBC that “the president’s conversations with the families of American heroes who have made the ultimate sacrifice are private.”

In other words, “the President is an unsympathetic oaf but that’s nothing that should concern you.”

EVEN MORE UPDATE: Trump was just asked about the conversation. His response appears to be a non-denial denial:

Trump, asked about his "proof" Rep. Wilson was inaccurate in her description of the call, responds: "Let her make her statement again." pic.twitter.com/lTOwJ7iCFl